by Chiara Filoni- Following the successful meeting between secular and Catholic entities in Genoa on July 15th of this year, |1| which also lead to the Charter of Genoa for the abolition of illegitimate debts, twenty Italian movements and progressives met on September 15th for CATDM Italy’s launch in the capital city of Rome.

The birth appeared to bring the necessary forces together to begin its work. In light of the issues raised by the various participants of the conference, there is good reason for the existence of such a dynamic. Several sources relating to the illegitimacy of the Italian debt have been traced to: the critical situation of Italian banks due to their embarrassing exposure to non-performing loans (over 85% since 2011) |3| and in spite of their bailouts which began in 2012, the usurious interest rates during the 1980s and early 1990s (reaching 24% in 1981), the increase in tax evasion amounting to 180 billion euros per year (a significant shortfall for the Italian state), the military and security expenditures (these costs now total EUR 1.9 billion, higher than the European average of EUR 1.7 billion), the major, yet unnecessary projects which have been imposed (GPNI – such as the Turin-Lyon high-speed rail project and the construction of luxury buildings for the 2009 G8 summit in Sardinia, which ultimately took place at L’Aquila in central Italy), and to corruption, that inexhaustible source of waste of public resources.

Despite the fact that interest rates have been decreasing for two years due to the quantitative easing policy of the ECB (the government is borrowing at a rate of 2.4% in 2016 compared to 6-6.5% in 2008), |4| interest payments on the debt remain the third largest item of public expenditure in Italy after social security (EUR 300 billion) and health (EUR 110 billion). This is due to the accumulation of interest and the excessively high rates paid in previous years as described earlier. Interest payments in 2016 make up 4.3% of Italy’s GDP, which equates to over EUR 70 billion euros. Due to the debt and interests, privatisations and cuts in the health budget, education and local communities have been put into place.

The Stability and Growth Pact dictated by the European Union (which aims to bring the debt / GDP ratio down from 130% to 60%) means 50 billion euros per year in cuts for Italy. In the eight-year period spanning from 2008 to 2015, the central government has reduced financial transfers to municipalities by EUR 22 billion. To this figure, we must also add the 17.5 billion euros of cuts to the health sector for a final sum of nearly 40 billion euros. The regional governors have reacted by increasing taxes on first and second homes. |5| This is even more unfair when we consider that municipal debts represent only 2.4% of the national debt. In the words of proud neoliberal Milton Friedman, the debt serves to: “make politically inevitable that which is socially unacceptable.”

Many areas of work are available to the new-born CADTM Italy, which in November (date to be determined) will meet again to choose its course of action.

A coordination committee will be set up to begin auditing as reflected on the international experiences of Ecuador and Greece. More than thirty individuals (including academics, activists, trade unionists and figures of the Catholic world) have already declared themselves willing to take part. The idea is to start working on an important, strategic sector on the national level, such as public health, which has suffered cuts and significant privatisation. Other fronts will also be taken into consideration, such as those of banks or of the aforementioned major-yet-unnecessary construction projects. The CADTM would serve as a centre for research and analysis on the problem of debt as well as for action in coordination with demonstrations taking place and struggles being fought nationwide. It would push the issue of the debt and advocate for the abolition of illegitimate debts within the scope of broader demands of social movements.

The committee will also serve as a platform of reference with regards to various audit activities in the country. At this stage, support and an exchange of information and best practices are critical, as various local audit teams have formed in the last few years in Parma, Milan, Venice, Naples, Livorno, and most recently Rome and Genoa. Parma, in particular, is home to one of the most developed cases. The local audit committee managed to attract the attention of civil society as well as legal authorities regarding a case of corruption and speculation linked to the increase in land prices, which resulted in the imposition of austerity on the people of the city by the local government. The Parma group also scrutinizes PPPs (public – private partnerships), which manage basic public services such as water and gas utilities. 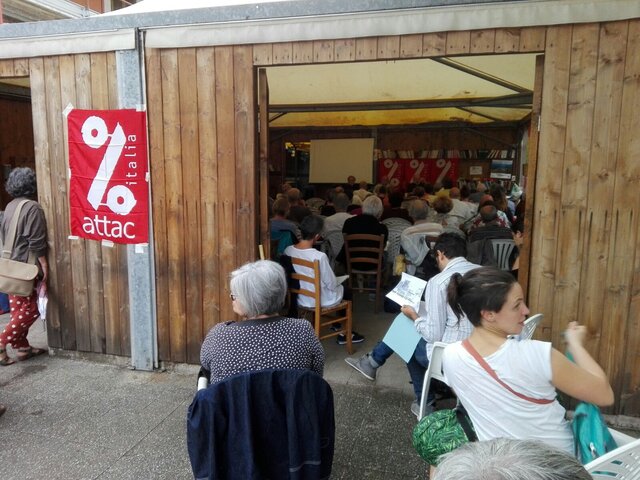 Attac Italy facilitated CADTM Italy’s launch in joining the CADTM international network at the 2016 global assembly in Tunis. Attac Italy will also be an important pillar, among others, for CADTM Italy.

In addition, Attac Italy held its summer school from September 16th – 18th in Rome immediately after the launch of the CADTM.

The summer school was based entirely on the theme of economic debt, which is considered to be the defining characteristic of modern capitalism. Three sessions in particular focused on the illegitimate debt, the means to cancel it, and the history of debt cancellation (The program can be found here:http://www.italia.attac.org/index.p… ). 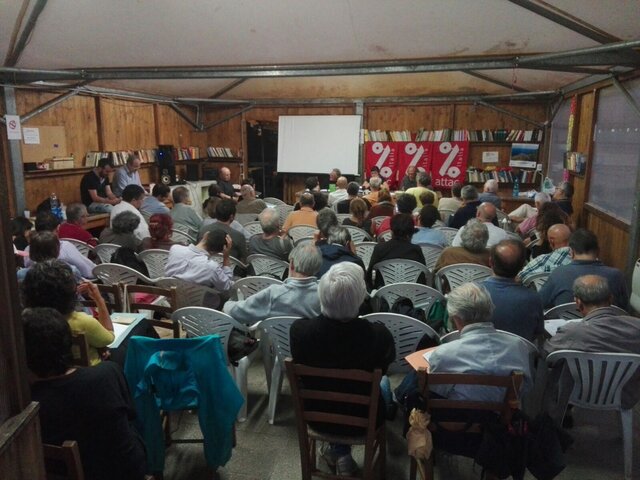 “The time is ideal,” insisted Éric Toussaint, guest of honour at the launch party. “Because you only have a small amount of time before the outbreak of a new debt crisis.”

CADTM Italy faces many challenges, which will not be easy to take on. The first of these is to involve other social movements with which we share similar goals and strategies. The CADTM’s ability to connect with other movements is crucial given that the debt is the perfect pretext to effectuate austerity measures, cuts in social welfare, and privatisation. The CADTM Italy’s analyses will thus be essential for student movements opposed to the commercialisation of community property, costly and unnecessary construction work (GPNI), growing poverty, forced evictions, and so forth. Like in the rest of the world, it will be difficult to analyse data for a group of citizens who do not have political support.

Despite these challenges, the abolition of the debt is a priority for achieving radical change of economic, financial and social policies. It is urgent, in Italy like anywhere else, to begin raising awareness of this issue.