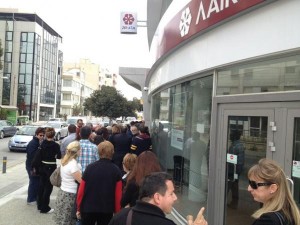 Cyprus’s banks are bust. As of 2011, banks based in Cyprus had lent over €150 billion; almost 900 per cent of GDP. Over €100 billion of these loans were from Cypriot banks, the rest from foreign banks trading internationally, based in Cyprus to avoid taxes.

The funds for the lending by the Cypriot banks came primarily from deposits in those banks. Deposits in Cyprus’ banks total €68 billion, 40 per cent of which is from foreigners, including €20 billion from Russians. A smaller amount was lent to Cyprus’ banks by buyers of their ‘bonds’, around €3 billion.

Because of the global financial crisis, Cyprus’ banks are not going to get back the money, some of the money, they lent. This now means they owe more money to the depositors and bondholders than they are owed. They are bankrupt.

The original deal reached with the EU was for the EU and IMF to lend the Cyprus government €10 billion to bailout the banks (a huge 60 per cent of GDP), whilst taxing bank deposits to raise a further €5.8 billion. The Cypriot government would have to implement austerity, liberalisation and privatisation in return. One of the key reasons for the tax on bank deposits is because the EU and IMF fear Cyprus will be unable to repay a larger bailout loan. They are right, but the €10 billion is also far too much.

In many ways Iceland’s situation following the financial crisis is similar to Cyprus’. It was a small country whose banks had lent and borrowed huge amounts from overseas, many multiples of the country’s GDP, and couldn’t repay when some of the money they were owed couldn’t be repaid. The country’s people were being held to ransom by an overly powerful financial sector which operated as a source of huge profits for foreign elites. Iceland’s government could not afford to bailout the banks, so instead they let the banks go bust, whilst protecting Icelandic savers. Whilst Iceland still suffered a crisis, its economy is now recovering and unemployment falling.

A deposit tax on ordinary Cypriots is the opposite of Iceland’s approach, hitting rather than protecting domestic savers. But taking money from the deposits of foreign elites is similar to the Icelandic policy – ensuring that those who invested large amounts of money in risky banks are the ones to bear the consequences of that risk.

Depositing money in a bank is not risk free. In return for allowing the bank to use money for profit making activity (lending, speculation, etc)  the depositor receives interest payments (profit) on that money. As with many investments, the higher the risk, and the larger the investment, the higher the returns.

People should have a right to store their money in a low risk way – no one should be forced to have their money used by banks for risky activities. Those who deposited less than €100,000 in Cypriot banks believed that this was risk free – as the money was guaranteed by the government.

The bondholders and rich depositors on the other hand knowingly lent to risky banks, in return for a profit on that money, and it is therefore the fairest option for them to take the hit. These rich reckless lenders should lose enough that there is no need for any bailout loans. But ordinary Cypriots should not have to lose anything, on deposits they were ensured were protected when they deposited their money.

It is an EU policy to protect deposits of up-to €100,000. This was probably too much for a risky banking system such as Cyprus with large foreign deposits as one of the key sources of funds for lending. And it is difficult to see why it should apply to rich foreign speculators who knowingly took on risk for profit in a financial system. But the EU made the policy, and so they should honour it – the Cypriot people should not receive different treatment. However, the Cyprus government cannot afford to pay out on all the protected deposits.

Cyprus needs an orderly bankruptcy for its banks. The EU should fund it with enough grants to enable the €100,000 guarantee to be honoured. The European Central Bank could create the money so that there is no impact on taxpayers elsewhere. The money involved is relatively very small, and one-off, so it would not have any wider impact. Deposits above this, and bondholders, should be treated as any normal creditor to a bankrupt company; only getting back anything which is left following an orderly bankruptcy.

Cyprus, like so many other countries, needs to get control over its banks in order to get them to invest in productive industries, rather than being part of a global speculation and tax avoidance ring. Being controlled by global financial interests does not benefit ordinary people – their economy or democracy. There appears to be fear in Cyprus at reducing the size of its banking industry. But the crisis shows how damaging that banking industry can be when it gets too large, just as in Iceland, Ireland, Spain and the UK. The people of Cyprus need policies which:

•    Protect ordinary people from the costs of rich speculators in finance

•    Rebalance the economy away from finance to productive industries, ensuring banking serves the public interest

These are all vital to enable Cypriot people to have economic democracy, and not become even more subservient to policies decided overseas, whether in Brussels or Moscow.